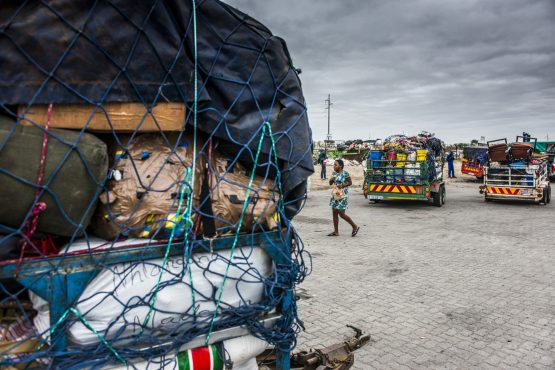 Nyoni Nsukuzimbi drives his 40-ton Freightliner for just over half a day from Johannesburg to the Beitbridge border post with Zimbabwe. At the frontier town—little more than a gas station and a KFC—he sits in a line for two to three days, in temperatures reaching 104F, waiting for his documents to be processed.

That’s only the start of a journey Nsukuzimbi makes maybe twice a month. Driving 550 miles farther north gets him to the Chirundu border post on the Zambian frontier. There, starting at a bridge across the Zambezi River, trucks snake back miles into the bush. “There’s no water, there’s no toilets, there are lions,” says the 40-year-old Zimbabwean. He leans out of the Freightliner’s cab over the hot asphalt, wearing a white T-shirt and a weary expression. “It’s terrible.”

By the time he gets his load of tiny plastic beads—the kind used in many manufacturing processes—to a factory on the outskirts of Zambia’s capital, Lusaka, he’s been on the road for as many as 10 days to traverse just 1 000 miles. Nsukuzimbi’s trials are typical of truck drivers across Africa, where border bureaucracy, corrupt officials seeking bribes, and a myriad of regulations that vary from country to country have stymied attempts to boost intra-African trade.

The continent’s leaders say they’re acting to change all that. Fifty-three of its 54 nations have signed up to join the African Continental Free Trade Area; only Eritrea, which rivals North Korea in its isolation from the outside world, hasn’t. The African Union-led agreement is designed to establish the world’s biggest free-trade zone by area, encompassing a combined economy of $2.5 trillion and a market of 1.2 billion people. Agreed in May 2019, the pact is meant to take effect in July and be fully operational by 2030. “The AfCFTA,” South African President Cyril Ramaphosa said in his October 7 weekly letter to the nation, “will be a game-changer, both for South Africa and the rest of the continent.”

Read: Africa pushes ahead on the world’s largest free-trade zone

It has to be if African economies are ever going to achieve their potential. Africa lags behind other regions in terms of internal trade, with intracontinental commerce accounting for only 15% of total trade, compared with 58% in Asia and more than 70% in Europe. As a result, supermarket shelves in cities such as Luanda, Angola, and Abidjan, Ivory Coast, are lined with goods imported from the countries that once colonised them, Portugal and France.

By lowering or eliminating cross-border tariffs on 90% of African-produced goods, the new regulations are supposed to facilitate the movement of capital and people and create a liberalised market for services. “We haven’t seen as much institutional will for a large African Union project before,” says Kobi Annan, an analyst at Songhai Advisory in Ghana. “The time frame is a little ambitious, but we will get there.”

President Nana Akufo-Addo of Ghana and other heads of state joined Ramaphosa in hailing the agreement, but a number of the businesspeople who are supposed to benefit from it are skeptical. “Many of these governments depend on that duty income. I don’t see how that’s ever going to disappear,” says Tertius Carstens, the chief executive officer of Pioneer Foods Group Ltd., a South African maker of fruit juices and cereal that’s being acquired by PepsiCo Inc. for about $1.7 billion. “Politically it sounds good; practically it’s going to be a nightmare to implement, and I expect resistance.”

Under the rules, small countries such as Malawi, whose central government gets 7.7% of its revenue from taxes on international trade and transactions, will forgo much-needed income, at least initially. By contrast, relatively industrialised nations like Egypt, Kenya, and South Africa will benefit from the outset. “AfCFTA will require huge trade-offs from political leaders,” says Ronak Gopaldas, a London-based director at Signal Risk, which advises companies in Africa. “They will need to think beyond short-term election cycles and sovereignty in policymaking.”

Taking those disparities into account, the AfCFTA may allow poorer countries such as Ethiopia 15 years to comply with the trade regime, whereas South Africa and other more developed nations must do so within five. To further soften the effects on weaker economies, Africa could follow the lead of the European Union, says Axel Pougin de La Maissoneuve, deputy head of the trade and private sector unit in the European Commission’s Directorate General for Development and International Cooperation. The EU adopted a redistribution model to offset potential losses by Greece, Portugal, and other countries.

There may be structural impediments to the AfCFTA’s ambitions. Iron ore, oil, and other raw materials headed for markets such as China make up about half of the continent’s exports. “African countries don’t produce the goods that are demanded by consumers and businesses in other African countries,” says Trudi Hartzenberg, executive director of the Tralac Trade Law Centre in Stellenbosch, South Africa.

Trust and tension over illicit activity are also obstacles. Beginning in August, Nigeria shut its land borders to halt a surge in the smuggling of rice and other foodstuffs. In September, South Africa drew continentwide opprobrium after a recurrence of the anti-immigrant riots that have periodically rocked the nation. This could hinder the AfCFTA’s provisions for the free movement of people.

Considering all of these roadblocks, a skeptic would be forgiven for giving the AfCFTA little chance of success. And yet there are already at least eight trade communities up and running on the continent. While these are mostly regional groupings, some countries belong to more than one bloc, creating overlap. The AfCFTA won’t immediately replace these regional blocs; rather, it’s designed to harmonize standards and rules, easing trade between them, and to eventually consolidate the smaller associations under the continent­ wide agreement.

The benefits of the comprehensive agreement are plain to see. It could, for example, limit the sort of unilateral stumbling blocks Pioneer Foods’ Carstens had to deal with in 2019: Zimbabwe insisted that all duties be paid in U.S. dollars; Ghana and Kenya demanded that shippers purchase special stickers from government officials to affix to all packaging to prevent smuggling.

The African Export-Import Bank estimates intra-African trade could increase by 52% during the first year after the pact is implemented and more than double during the first decade. The AfCFTA represents a “new pan-Africanism” and is “a pragmatic realisation” that African countries need to unite to achieve better deals with trading partners, says Carlos Lopes, the former executive secretary of the United Nations Economic Commission for Africa and one of the architects of the agreement.

From his closer-to-the-ground vantage point, Olisaemeka Anieze also sees possible benefits. He’s relocating from South Africa, where he sold secondhand clothes, to his home country of Nigeria, where he wants to farm fish and possibly export them to neighbouring countries. “God willing,” he says, “if the free-trade agreement comes through, Africa can hold its own.”

In the meantime, there are those roads. About 80% of African trade travels over them, according to Tralac. The World Bank estimates the poor state of highways and other infrastructure cuts productivity by as much as 40%.

If the AfCFTA can trim the red tape, at least driving the roads will be more bearable, says David Myende, 38, a South African trucker resting after crossing the border post into South Africa on the way back from delivering a load to the Zambian mining town of Ndola. “The trip is short, the borders are long,” he says. “They’re really long when you’re laden, and customs officers can keep you waiting up to four or five days to clear your goods.” —With Pauline Bax and René Vollgraaff

Sguazzin is a senior writer and Naidoo is a reporter at Bloomberg News in Johannesburg. Latham covers government affairs in Harare.