Data for South Africa, Ghana and Nigeria published in the past week show food prices among the main contributors to headline inflation.

In Nigeria, a decline in the value of the naira is compounding food inflation that’s already accelerated due to land border closures that started on August 2019, trade restrictions aimed at curbing the spread of the coronavirus and clashes between herders and farmers. The food index, which accounts for more than half the inflation basket, rose 15.2% in June, the most since March 2018.

About 30% of households reported severe food insecurity last month due to a lack of money or other resources, compared with 5.9% at the start of 2019, according to a report by the National Bureau of Statistics. The cost of imported foods such as high-quality rice have soared by 28% from a year ago, forcing many to alter their diets. “We have had to limit our spending on ‘fancy’ foods like cereals and nut milk because the prices are so high,” Kemi Adeola said from Abuja, the capital. “Even bread that used to sell for 250 naira now sells for 450 naira. My children are now learning to adapt to pap and other local foods,” she said referring to a staple porridge made of corn meal.

Costs could increase further after the central bank stopped official foreign-exchange supply for corn imports to boost local production. The move could lead to shortages and drive businesses to access hard currency on the parallel market, where the naira changed hands at 470 per dollar on Friday, compared with official rates of between 360 and 381. 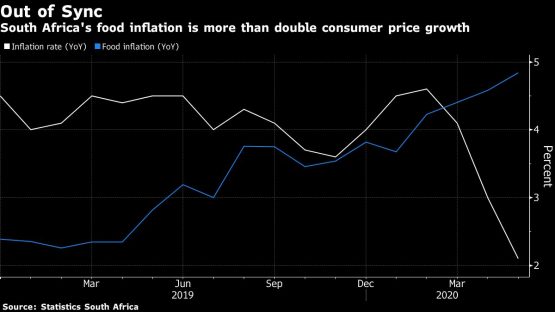 In South Africa, a nationwide lockdown spanning more than 100 days has also led to rising food insecurity. Johannesburg Mayor Geoff Makhubo said almost one million people in the country’s commercial hub would need food aid due to the restrictions.

Forty-seven percent of respondents in a National Income Dynamics Study-Coronavirus Rapid Mobile Survey said their household ran out of money to buy food in April. This compares with 21% who said they didn’t have enough money to buy food in the previous year, according to the study.

While food inflation was more than double headline inflation in June, it’s approaching a peak, with a bumper corn harvest forecast and competition authorities clamping down on excessive pricing by some companies during the shutdown, said Jeffrey Schultz, a senior economist at BNP Paribas.

Stability has returned to food markets as the drivers of price increases, such as panic buying, have subsided, according to a report by the the nation’s Competition Commission.

Similarly in Ghana, growth in food prices that was pushed up by lockdowns in the two major cities is likely to moderate as the economy opens up and the harvest for staples including corn, cassava and plantains start in August, said Courage Boti, an Africa economist at Databank Group in Accra.