A massive exodus of capital from emerging economies has left many in a Catch-22 position: the kinds of monetary and fiscal stimulus measures that the rich world is deploying could perversely make things worse.

Interest-rate cuts can help households and companies, but in an increasing number of countries they’re driving rates so low that they don’t even compensate for inflation — adding an incentive for foreign funds to pull out. And fiscal expansion can raise the kind of funding concerns that still afflict emerging nations, raising the prospect of credit rating downgrades and calls for international rescues. 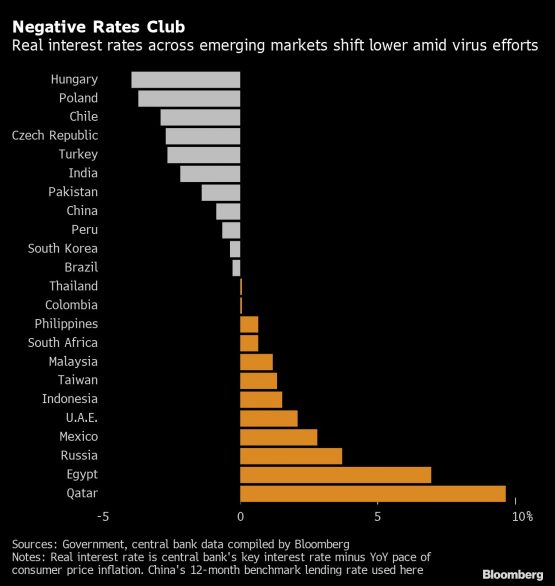 “We should be worried about emerging markets,” said Barry Eichengreen, a University of California Berkeley economist. In addition to suffering disproportionately from the collapse of commodity prices, supply chains, trade and spending, they’re facing “clearly, the mother of all sudden stops” in capital flows, he said.

Eichengreen and fellow economist Ricardo Hausmann are famed for labelling the underlying cause of the late-1990s Asian financial crisis as the “original sin” of excessive reliance on borrowing in foreign currencies.

While many emerging markets have worked hard to address that risk — building local debt markets and accumulating foreign-exchange reserves as a buffer for times of trouble — the same old problems keep resurfacing. Just as during the global financial crisis, the 2013 “taper tantrum” over the US phasing out quantitative easing and the 2015 China-devaluation shock, developing nations are seeing capital flight.

By one measure at least, it’s even worse than in the past.

Some $92.5 billion of portfolio investments held by nonresidents flew out of emerging markets over the 70 days starting January 21 — when the coronavirus outbreak began gathering pace in China — Institute of International Finance data show. Outflows in each of the previous three disruptions totalled less than $25 billion over the equivalent period.

“Compared with episodes like the GFC, where we saw a long, painful, yet more ‘manageable’ outflow episode, this time around the outflow has been fast, a literal ‘sudden stop,”’ said IIF economist Jonathan Fortun. There is one big exception: China, which continues to benefit from diversification inflows as it opens up the world’s second-largest bond market to overseas investors. China’s aggressive efforts to contain the coronavirus also helped its stock market outperform global counterparts.

For others, it’s been a bruising start to 2020. An MSCI gauge of stocks excluding China handed investors a 31% loss last quarter, worse than the 21% drop for advanced-economy shares. Brazil, South Africa, Russia and Mexico have all seen their currencies tumble more than 20% against the dollar the past three months. Rand versus US dollar

If advanced economies stay closed into 2H, markets might start testing central banks’ capacity to backstop the system. For emerging markets, problems could crystallise even sooner. In many cases, dependence on external funds is greater than it was in 2008. Those funds are now drying up. – Scott Johnson and Tom Orlik

“The tension between lower rates to boost the economy, but not so low as to jeopardise macro and foreign exchange stability, is the perennial policy dilemma for these central bankers,” said Vishnu Varathan, head of economics and strategy at Mizuho Bank in Singapore.

Currency depreciation is particularly painful to businesses in developing nations that raised debt offshore. Around 13% of all emerging-market corporate debt is dollar-denominated, down only slightly from 15% in 2009, IIF data show.

While the Federal Reserve has expanded the supply of dollars abroad, helping avert a wholesale freeze in exchange markets, it still doesn’t address the increasing cost of debt servicing as the greenback climbs. Sharply decelerating, or shrinking, economies will also sap revenue, exacerbating borrowing needs that are expanding thanks to fiscal initiatives to prevent even deeper downturns.

“There’s probably quite a few countries at risk of downgrades,” James McCormack, global head of sovereign ratings at Fitch Ratings, told Bloomberg Television last week. “We’re going to have to really review almost the entire sovereign-rating portfolio. I don’t think there is any that we can skip over and say everything is going to be fine there.”

Policy makers will need to consider options such as directly financing companies where lending channels are blocked, or have central banks buy government debt to finance fiscal spending, according to economists at JPMorgan Chase & Co.

JPMorgan analysts also have called for the International Monetary Fund to ramp up its provision of credit to endangered members on accommodative terms. South Africa has already signalled it may need the fund’s assistance, for the first time, while Ecuador and Zambia are seeking to reorganise their debt, raising fears of a default.

“It is unlikely that, even with very benign assumptions (such as global interest rates remaining close to zero for an extended period), debt can be assessed to be sustainable for many countries where financing needs will be large,” JPMorgan analysts including Nora Szentivanyi wrote in a note last week.