I know, you’ve heard it all before – you need to save for retirement, pay yourself first, and look after your future so you don’t have to leech off your kids in your old age.

And it’s true. One day you won’t be able to earn an income, and you’ll have to have an investment big enough to pay the bills and hopefully leave you with a little extra.

Everybody knows the theory, and many have every intention of putting it into practice, then … bam! The industry hits you with some abbreviations – “To start investing for your retirement, consider an RA and/or a TFSA because there are some really great tax benefits.”

Those who make it past finding out that RA stands for ‘retirement annuity’ and TFSA stands for ‘tax-free savings account’ are hit with something even worse – having to choose.

And this is where I feel many potential investors who want to start looking out for their future end up freezing and doing nothing. Petrified of choosing the wrong option, they never actually invest in an RA or a TFSA because making the ‘wrong’ choice seems worse than doing nothing.

But the great news is that there’s no right or wrong choice here. It’s a choice between great and awesome.

RAs and TFSAs are both fantastic ways to invest for retirement, while protecting you from paying tax. Here’s how each works and the rules around them:

How an RA works

An RA is basically an investment account that holds some investments. You can put unit trusts, exchange-traded funds (ETFs) or even cash in your RA, and they will be protected from tax while they are inside the RA. 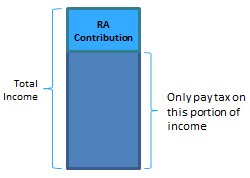 Sars is quite generous in allowing you to deduct contributions to an RA from your income before you’re taxed.

But this doesn’t mean that if you could contribute your entire salary to an RA (maybe by living in your parents garage) you’d pay zero tax. Sars caps the amount of RA contributions you’re allowed to deduct from your income.

The maximum you may deduct is 27.5% of your annual income or R350 000, whichever is lower. Unless you’re earning over R1.27 million a year, you won’t have to worry about the R350 000 number – for us mere mortals the 27.5% applies. If you want to calculate your maximum tax deductible RA contribution, here’s how.

A really great feature of RAs is that you don’t pay any tax on the investments inside. This means no tax on interest earned, dividends or income and no capital gains tax on sales. That’s a lot of ‘no tax’, which means your investments work harder for you because you keep more of your returns.

There are some rules around what you can and can’t put inside an RA. Sars has a local-is-lekker approach to RAs, so no more than 25% of your investments can be outside of South Africa. (You’re allowed an additional 5% into Africa, which means the offshore maximum is then 30%).

You’re also not allowed to have more than 75% in equities or 25% in listed property.

RAs were specifically designed to help people save for retirement. And since the commonly accepted ‘earliest’ retirement age is 55 (of course those of you aiming for FIRE or ‘Financial Independence, Retire Early’ know this minimum age is a crock), you cannot access the money inside an RA until you’re 55.

Read: What it takes to retire at 45

But this might actually be a good thing. No access before 55 forces you to be disciplined and to stay invested until you’re retired.

There are a few ways you can get your money out sooner, but these are pretty much limited to financially emigrating from South Africa or as part of a divorce settlement. There may also be tax payable if you take the funds out early.

Once you reach age 55, and your RA matures there are some rules around what you can do with the funds inside it. You’re only allowed to take a maximum of one third of the value as cash (unless the total value of the RA is less than R247 500, in which case you can take it all out as cash).

The remaining two-thirds of the value of the RA must be used to buy either a living or a guaranteed annuity (or a combination of both). The idea is that this annuity will pay you an income when you’re retired.

Since Sars has allowed you to deduct tax while contributing to an RA, and allowed the RA investments to grow tax-free, it unfortunately has no issue trying to get some tax out of you once you retire.

The up to one-third cash you’re allowed to take is taxed according to a retirement tax table.

In addition, the monthly income generated from the living/guaranteed annuity you buy with the remaining two-thirds is subject to income tax according to the income tax table.

How does a TFSA work?

A tax-free savings account is basically also an investment account that holds some investments. You can put unit trusts, ETFs or even cash inside a TFSA, and these investments will be protected from tax while inside the TFSA.

The money you put into a TFSA cannot be deducted from your income for tax purposes. In other words the money you invest will be after-tax money. Something like this: 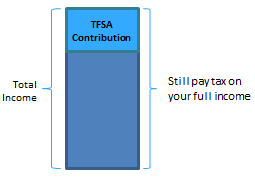 There’s also a limit on the total amount you can contribute to a TFSA over your lifetime. This is currently set at R500 000. If you contribute the maximum annual amount (R33 000) each year it’ll take you a little over 15 years to reach the lifetime limit.

Note, contribution limits only apply to money that you put into a TFSA. Thus any interest, dividends or proceeds earned from the investments inside the account won’t affect your annual or lifetime limits.

Just like RAs, there’s no SA tax payable on any of the investments inside a TFSA. No tax on interest earned, dividends or income and no capital gains tax on sales.

Thus your returns will be super-charged because of the tax protection you get.

Because Sars is incentivising you to save for your retirement (by giving you some pretty cool tax breaks) it does impose a few rules around what you can invest in. Most unit trusts and ETFs are available, but you aren’t allowed to invest in commodities (such as gold and platinum). This is because without this restriction, there would be nothing to stop an investor from putting their entire retirement savings into gold, for example, which is not diversified and therefore really risky.

You’re also not allowed to invest in exchange-traded notes (ETNs) since it’s technically possible for you to lose all your money in an ETN if the provider goes bankrupt (no such problem exists with ETFs).

The hinges of the door to your TFSA money are pretty lose. You can take money out at any time. This is great for those who are pursuing early retirement (guilty as charged) because it means you can access your money at whatever age you need it. It’s maybe not so great for those who will be tempted to dip into their investment when they’re short of cash.

Note, any money taken out of a TFSA cannot be ‘replaced’ without affecting your limits. For example if you put R20 000 into your TFSA and then took it out again, you’ll only have R13 000 you can put in for the rest of the year before you hit the R33 000 annual limit. You will also only be able to contribute another R480 000 over your lifetime.

TFSAs are the gymnasts of the retirement product world – they’re really flexible!

Unlike an RA, there are no restrictions about how much you can take out as cash, or what you have to use that cash for.

There’s no tax payable when accessing the money inside a TFSA. Because you use after-tax money to make contributions to a TFSA, Sars has already taken its cut and is happy to let you keep everything that comes out of your TFSA.

TFSA vs RA – A summary

The above may still seem a little overwhelming, so I summarised the most important aspects into a compact picture: So, which way to go?

Now that you know the ins and outs of RAs and TFSAs, you may be wondering which would work better for you.

They’re both excellent ways to save for retirement and the tax breaks are awesome, so you will do well in either one.

However, a few game-changers may make one much better suited for your goals than the other:

If you’re still undecided, there’s nothing wrong with doing a combination of an RA and a TFSA (there are no rules preventing you from having both). That way you can get the benefits of both types of retirement products. Going this route will also give you a lot of flexibility when you do retire.

Finally, here’s a really great tax hack (which I first came across courtesy of Nerina Visser from etfsa.co.za):

Because RA contributions are tax-deductible, you get a tax refund after you submit your tax return. Take this refund and plug it straight into your TFSA, and let Sars fund your TFSA for you.

This article was originally published on the Stealthy Wealth blog here.