With the state airline bankrupt and the power monopoly burning through its latest bailout, Sasol, the fuel and chemicals company that’s South Africa’s biggest by revenue, has stumbled into its own debt crisis.

Read: Sasol caught between the devil and the deep blue sea

The company was already struggling to keep up with repayments on R162 billion in debt because of a botched US chemical project, when it was blindsided last week a plunge in oil prices. Its shares tumbled to the lowest in two decades and the covenants on its loans are under threat. A JPMorgan Chase & Co analyst said bankruptcy, while unlikely, is a possibility.

“Sasol, up to the recent past, was South Africa’s global icon, not just in terms of its size, but in terms of its technology, wealth creation and tax payments,” said Iraj Abedian, the founder and chief executive officer of Pan African Investment & Research Services and former chief economist for Africa’s biggest bank. The company has been a linchpin of the economy for half a century. It makes fuel and chemicals from coal and gas, supplies about 25% of the country’s motor fuel and directly and indirectly accounts for 400,000 jobs and 4% of the economy.

On Thursday it said it’s considering selling assets in excess of its current $2 billion plan, as well as stock, to ensure it meets creditors’ demands. The company will hold a call on Tuesday with investors to explain the measures it’s proposing. The shares have slumped 68% in the past week, sending its market value to R31.8 billion, a fraction of the R411 billion high in 2014, when it accounted for 5% of the benchmark stock index. Nowadays, it accounts for less than 0.5%.

While the impact of the coronavirus on oil demand and the price war between Saudi Arabia and Russia are beyond its control, Sasol’s vulnerability is of its own making.

The company, which was founded in 1950 by the government and shielded South Africa from sanctions during the apartheid era, sank into debt after the costs of a mega-project in Louisiana ran over budget by about 50% to as much as $12.9 billion. In October it fired its co-chief executive officers and handed the role to Fleetwood Grobler, a company veteran.

Last week it revaled that it broke this year with a regular practice of hedging the oil price, which determines prices for its own products.

“For a company of its nature one would expect them to manage scenarios much better,” Abedian said. “It raises questions about the risk mitigation” abilities of its management, he said.

A rights offer would likely be substantial given the size of Sasol’s debt; its credit ratio, as per covenants with lenders, can’t exceed 3.5 times earnings before interest, tax, depreciation and amortisation on June 30. The ratio has to narrow to 3 at the end of the year and re-negotiation of the covenants is “essential,” according to a note from Bank of America. Prior to the oil price plunge its level was already 2.9 and the rating on the company’s debt was cut to junk on March 5 by Moody’s Investor Services.

“A distressed rights issue amid current market conditions will be a hard sell to Sasol shareholders,” said Abdul Davids, a fund manager at Kagiso Asset Management, which oversees R32 billion, including Sasol stock. “Based on current oil prices and existing covenant restrictions, a capital raise in the order of R80 billion might be required.”

An offer of that size would almost double the record for a South African rights issue. 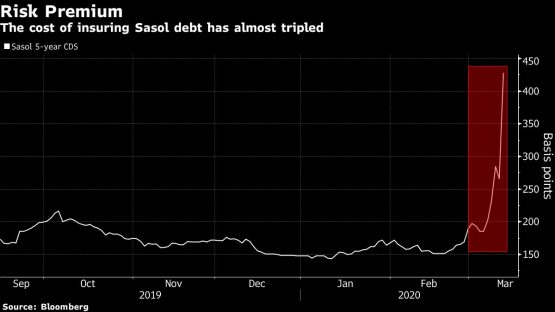 Still, given Sasol’s importance to the South African economy, its two biggest shareholders, the Government Employees Pension Fund and the state’s Industrial Development Corp., may feel compelled to support the company. Together they own more than 21% of Sasol.

The GEPF has a history of supporting key South African companies. In 2015, the Public Investment Corporation, which manages the GEPF’s money, underwrote 25% of a rights offer by stricken platinum miner Lonmin.

For now, there is no need to panic. The first significant debt to come due is $1 billion in loans next year and the company has $2.5 billion available.

“Liquidity isn’t a problem at this stage,” Alex Comer, an analyst at JPMorgan, said in a note. “Its looks OK for at least another year, even assuming $35 dollars a barrel of oil, providing the banks don’t call in the debt on a covenant breach.”

Still, the longer the oil price stays at current levels, the more uncomfortable Sasol investors and the government are likely to become. For a government already trying to stave off the collapse of power utility Eskom and lower a jobless rate of 29%, it’s another threat.

“Sasol is probably too big to fail,” said Asief Mohamed, founder and chief investment officer at Aeon Investment Management in Cape Town. “It will create systemic risk for South Africa.”