South Africa lost more in tax revenue in the first three-and-half months of its fiscal year than it borrowed from the International Monetary Fund and the African Development Bank combined.

A lockdown that initially shuttered almost all economic activity led to an under-recovery of R82 billion for the fiscal year through July 15, South African Revenue Service Commissioner Edward Kieswetter said Friday in an interview.

Lockdown rules and allowances to cushion businesses against their impact contributed to the drop in income. The sale of tobacco products has been prohibited for four months and the government reinstated a similar ban on alcohol sales from July 13. Relief measures included a deferral of payroll taxes and excise and fuel levies.

In the three months through June, there was an under-recovery of about R47 billion, with excise-duty collections including levies on alcohol, tobacco products and fuel contracting 42% from a year earlier. 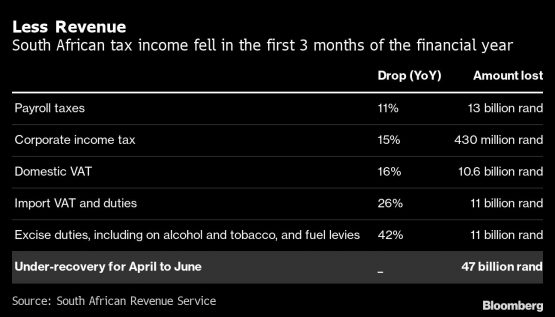 In February, the government left taxes unchanged due to “weakness in the economy” and opted to broaden the tax base, the Treasury said at the time. It has since said an additional 40 billion rand in taxes needs to be raised over the next four years.

Significant need
“The reality is that there was a need in February to raise 40 billion rand more,” said Kieswetter. “Right now, that need is significantly bigger than R40 billion because of the coronavirus.”

While some restrictions have since been eased, many businesses have closed and the 30.1% unemployment rate is set to worsen, further weighing on tax collections. In a supplementary budget in June, the government cut its revenue projection for this fiscal year by more than R300 billion.

The revenue agency will work with the National Treasury and Reserve Bank on proposals for the main budget review to be presented by Finance Minister Tito Mboweni in February, Kieswetter said.

Mboweni told clients of two of the country’s biggest banks in June that there are no plans to boost income, corporate or value-added taxes, but the Treasury is discussing a possible inheritance tax and a so-called solidarity tax to raise additional funds. Taxes on the wealthy are favoured politically.

South Africa’s top income-tax rate is 45%, corporate tax is 28% and VAT is 15%. It has little room to raise levies with the ratio of tax revenue to GDP at 26%, compared with a global average of 15%, according to World Bank data.