Gold is heading for the biggest weekly gain since 2016, burnishing its credentials as an effective haven, as fearful investors struggle to assess the impact of the expanding global health crisis.

Bullion’s up 5.3% since Monday, near seven-year highs, amid a rush away from risk. An epic collapse in bond yields is spurring gains, with concerns rising over the scale of the coronavirus outbreak and effectiveness of policy. 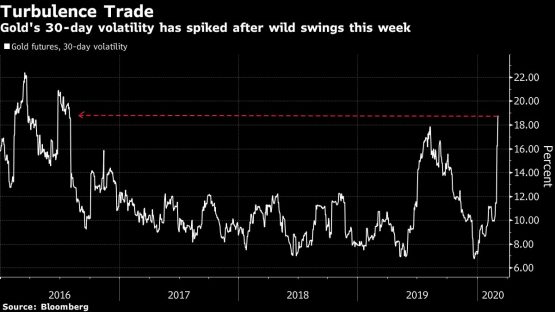 The precious metal is one of the standout winners from the outbreak, with Goldman Sachs Group. saying the commodity “has immunity to the virus.” Separately, money manager Jeffrey Gundlach told CNBC that gold is the best thing to own now and is headed to new highs. Bullion’s jump has come as equities sank and the Federal Reserve enacted an emergency rate cut.

“The risk-off tone in markets played into the hands of gold,” Australia & New Zealand Banking Group Ltd. said in a note. Investor appetite was “supported by sharp falls in equity markets,” it said.

The global advance of the coronavirus has shaken confidence across major economies, prompting central bankers to proffer stimulus measures, including lower interest rates. In addition to the Federal Reserve’s emergency cut this week, Canada and Australia also eased.

The latest market ructions come after signs the coronavirus is spreading further in the US More than 2 000 people in New York are in self-quarantine, according to a New York Times report.

On other precious metals, silver, platinum and palladium all dropped.