Gold just got a powerful boost from the Federal Reserve, with bullion extending gains in Asia after the US central bank’s emergency, virus-driven rate cut set off a collapse in 10-year Treasury yields to an all-time low.

Bullion prospers from low rates, and more easing is expected from the Fed and other central banks as policy makers seek to blunt the economic fallout from the health crisis. Money markets point to the Bank of Canada jumping into action next with a cut expected its scheduled meeting later Wednesday. 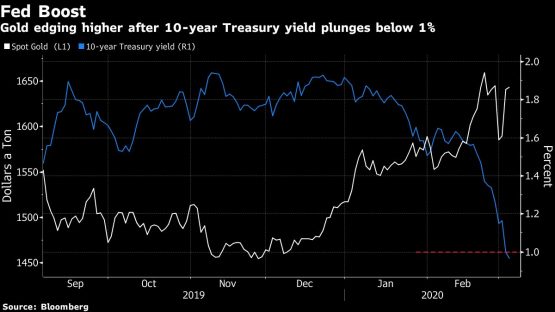 Gold has surged more than 8% so far this year on sustained haven demand, with prices hitting a seven-year high as holdings in bullion-backed exchange-traded funds expanded to a record. Fed policy makers shaved 50 basis points off their benchmark, cutting rates outside the normal cycle of meetings for the first time since 2008. The Fed’s easing, including debt purchases, contributed to a decade-long rally in bullion that sent prices to a record in 2011.

“Central-bank actions are aiding gold appreciation,” said Chris Weston, head of research at Pepperstone Group in Melbourne, Australia. “The Fed are worried, and so the equity market feeds off Powell’s sentiment, which is supporting gold,” he said, referring to Fed Chairman Jerome Powell.

Gold jumped as much as 0.7% to $1 652.67 an ounce, and traded at $ 1 643.67 at 11:09 a.m. in Singapore following Tuesday’s 3.2% surge. The Fed’s latest move is helping to reinvigorate demand after bullion plunged on Friday, with investors selling the metal to cover losses in other asset classes.

The S&P 500 Index ended almost 3% lower on Tuesday following the Fed’s cut, as well as comments from Powell that the outbreak will weigh on activity “for some time,” and a joint call between leading finance ministers. The 10-year Treasury yield plunged below 1% to a record low, while the dollar fell.

Gold-backed ETFs saw more inflows on Tuesday, with the total expanding to the most ever. There was an influx 15.6 tons, the most in tonnage terms since mid-January, according to a preliminary tally compiled by Bloomberg News.

On the virus front, Vice President Mike Pence — who’s leading the US response — said that 13 states now have coronavirus cases. Infections also rose in South Korea and Iran, where more officials were diagnosed.