From A+ crisis to zombie apocalypse 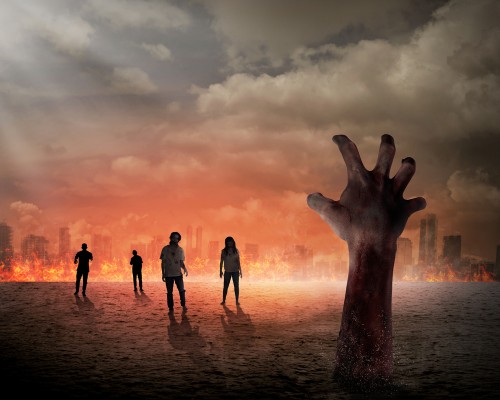 We are not ready for this. We haven’t even found the cure for our own ailing SOEs and now here is a virus named “corona”, nogal.

What I find ironic, if not entirely enlightening, is the definition and meaning of the word. Corona, according to some online dictionary, is a circle of light that can sometimes be seen around the moon at night.

Thanks corona, for picking up where Eskom has left off, with pretty much the same nett effect of leaving us in the dark.

Various news platforms have been describing this total viral onslaught as anywhere between the end of the world as we know it and not quite the zombie apocalypse.

This is an A-grade crisis.

Worldwide markets are stumbling. Indexes fluctuate by the equivalent of hundreds of billions of dollars daily. Investors are panicking, policymakers are at a loss. And while measures are put in place to contain the spread of the virus the domino effect is likely to be as dire as the final outcomes are uncertain.

From the woman in the street to the trader on Wall Street; all of us are already experiencing the cumulative impact on the global economy and the world’s financial markets. And until we have more clarity on the eventual outcome of this pandemic and its impact on economic activities, financial markets will remain unstable.

Global is not good. Local is not lekker either

Of course, South Africa is not spared. While the virus was still in the realms of unlikelihood at the end of 2019, it has become a real, present and growing danger, costing money, perhaps livelihoods, if not (yet) lives.

Measures have been put in place, events cancelled, travelling postponed, and markets ruined. Schools have closed although the lessons we need to learn may just be beginning.

Lessons from crises past

Talking of which, while it is impossible to accurately predict what the impact on the SA economy will be, we do have previous crises to learn from.

But first and foremost, however, we need to acknowledge that our economy was on the way to ICU long before corona came along, no thanks to a dysfunctional and destructive government. It is, as the saying goes, what it is.

Based on what we know about our economy BC (before corona), and “superimposing” our previous experience of other crises over our estimates, we can form a picture of what can be expected over the next few quarters. Please note, these are rough estimates and will be affected by several variables.

Note again, these estimates are based on our BC estimates adjusted for our experience during previous crises. Remember; the important part is not the actual estimates but rather the expected pattern.

What is clear is that it will serve no purpose to complain about economic growth for 2020, because there won’t be any. And the weaker economic expansion will result in several economic variables deteriorating, like fiscal debt-, fiscal deficit- and current account deficit ratios relative to GDP.

A deterioration in these variables will inevitably only hasten a downgrade. So, what can we expect by way of policy support?

The Sarb cut the repo rate by 1% on Thursday and we do not anticipate a significant negative reaction, like a sharp fall in the exchange rate, due to such a large reduction in interest rates.

What we really need is significant fiscal policy support. We need the state to cut taxes and even increase spending to support the economy. Unfortunately, this option is not available.

The reason for this is as clear: For years the fiscal accounts have been mismanaged. State debt has reached unsustainable levels and even before corona the deficit was budgeted to reach nearly 7% of GDP. Now, with a weaker GDP, even lower taxes and more pressure on spending, a significantly higher fiscal deficit is more likely. The inevitable result will be state debt that will rise even more, which will make it even more difficult to reign in future spending.

Analysts and economists repeatedly warned government to mend their sinful ways before. Government should have taken the difficult decisions to address the deterioration on the fiscal accounts when we had the opportunity. But instead of acting responsibly, the ruling party has been blundering forth, driven by idiotic ideology, mismanagement, cadre deployment and driving state finances into the ground.

We have no dry fiscal ammunition left.

How individuals and businesses position themselves in the current environment is important. Be aware of developments, identify your risks and manage them. One way of managing risk is to ensure that your portfolio is properly diversified – including a significant diversification abroad.

Finally, there remain many attractive investment opportunities in SA. A weak currency, juicy yields and a liquid market are all attractive characteristics of the SA financial markets.

But make no mistake. We were in deep trouble before this latest crisis. The virus will only make things worse and there is not much we can do about it. Instead of putting the country first when we had the opportunity, our political leaders were more concerned about their own political agendas.

That is why we are not ready for this mess.