Debt relief calls get cool welcome in some of poorest nations

When African ministers held a video conference call to discuss debt relief last week, the same concern kept cropping up: how to cut the payments without jeopardising future access to markets.

One African Finance Minister, who asked not to be named because of the sensitivity of negotiations, said creditors may victimise his country if he is too vocal about a waiver in public. Benin’s Finance Minister Romuald Wadagni has argued the risk of being shut out of debt markets may outweigh the benefits of a debt-service suspension.

The concerns underline the looming realisation among governments and policy makers that asking bondholders for a suspension may hurt more than it helps, despite growing calls worldwide to waive payments amid the economic fallout of the coronavirus. The world’s poorest nations face some $140 billion wall of debt maturing this year just as access to hard currency dries up. “Countries will need to assess whether the standstill deals with the stigma issue, but it is something that many countries are going to be very nervous about,” said Daniel Bradlow, professor of international development law and African economic relations at the University of Pretoria.

A group of the world’s largest economies has agreed to suspend about $20 billion in debt servicing payments for 73 nations and the International Monetary Fund has also granted waivers on loans to 25.

But it’s proving trickier to expand the relief to Eurobonds. The group of African finance ministers, that met on Thursday, expressed worries that even market-friendly mechanisms to reschedule bond payments could be interpreted as default, said a person familiar with the discussion.

Government reluctance to call for help comes on top of a long list of issues mentioned by private creditors that range from legal difficulties to the risk of rating downgrades.

The possibility that Eurobond terms might be changed as part of the debt holidays has added pressure to markets. Dollar and euro-denominated bonds issued by African nations carry an average yield of 10.2%, according to data compiled by Bloomberg, a level that usually prohibits access to new funds. 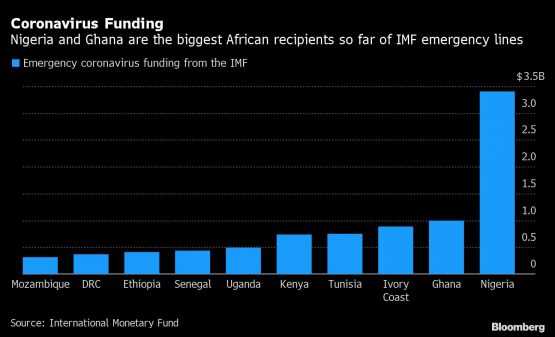 The IMF has issued $10 billion in emergency lending to African countries during the coronavirus pandemic. The continent’s economy is projected to contract by at least 1.25% this year, the worst reading on record.

“We are in a unique situation,” said Sergey Dergachev, a money manager at Union Investment Privatfonds GmbH in Frankfurt. “Many emerging-market investors sense and understand that many sovereign and corporate issuers will be hit hard or are already in trouble.”

One way to avoid individual countries being singled out for requesting debt relief might be found in a global initiative proposed by the United Nations Economic Commission for Africa.

The effort is supported by sovereign-debt experts, including Lee Buchheit, who have pointed to the shortage of time for countries to request relief on a case-by-case basis.

Yet a reluctance to jump into a global initiative, and private creditors’ warnings about the complexity of the debt instruments as well as their tangled ownership structures, may require just that, according to Anne-Laure Kiechel, the founder of Paris-based Global Sovereign Advisory.

“The only way to do it is bilaterally with your creditors,” said Kiechel, who is working with several African governments. “What we are advising Ministers to do is that they should engage with investors sooner rather than later.”