Companies should grab cash now because a grim winter is coming

The months since coronavirus swept the world have been a bumper period for listed companies selling more stock.

This isn’t yet on par with the amount of capital banks had to raise after the financial crisis, but it’s a welcome change. A business with a bigger equity buffer provides comfort in troubled times – more so than being hooked on debt, which must be repaid. Until recently, companies were hellbent on shrinking their share counts via stock buybacks, or they’ve delisted entirely following a debt-funded takeover or buyout. Citi analysts dubbed the trend ‘de-equitisation’.

‘Re-equitisation’ is just getting started.

As bosses and institutional investors return from the beach, more companies will probably tap equity investors for cash.

Sectors likely to recover slowest from the pandemic – airlines, aerospace and anything related to retail or hospitality – are sure to be first in line. UK mall landlord Hammerson, British Airways owner International Consolidated Airlines Group SA, and Sydney Airport have recently announced bumper share offerings. Rolls-Royce Holdings is reportedly exploring the idea.

The British aircraft engine maker shouldn’t hang around. Equity markets are still pretty supportive, and being back of the queue is inadvisable. For a variety of reasons – chief among them the risk of a second virus wave – this winter could be pretty jarring for the stock market. Safer to act now.

There are those who favour a different approach. With bond markets pumped up by central bank liquidity, selling debt is cheap, even for overstretched borrowers. The temptation is just to load up on more.

Boeing borrowed $25 billion rather than tap shareholders or the government for help. This has made its capital structure even more unbalanced.

There’s nothing like having a big slug of equity to reduce net indebtedness and reassure customers, suppliers and rating agencies that the company can meet its obligations. RBC analyst James Nevin described Sydney Airport’s A$2 billion ($1.4 billion) equity raise as a “safety blanket to sleep better at night”. There comes a point when adding more debt isn’t sustainable.

European companies raised €61 billion ($71.5 billion) of equity capital during the first half of 2020, a 45% increase on the same period last year, according to a Berenberg analysis.

Although initial public offerings are pretty rare right now, companies that already have a stock-market listing have raised money to repair balance sheets, fund growth or pay for some mixture of the two. The UK led the way, with many firms taking advantage of relaxed regulations that allow the issuance of up to 20% of the stock to whomever will buy it, sparing companies the need to consult all current shareholders.

Companies do now have a better idea of the damage the virus will do to their business, making the need for action more obvious. Those diminished expectations have begun to trigger a wave of goodwill impairments and asset writedowns that further erode balance-sheet equity and key credit ratios such as debt-to-equity.

IAG is raising more than half of its current market capitalisation. This is painful, but its management noted that doing so will “re-equitise the balance sheet” after the airline group lost €3.8 billion between January and June. It’s hardly the only travel-exposed company that could benefit from more equity capital. The chart below shows a selection of aerospace manufacturers and airlines whose liabilities exceed their balance-sheet assets. 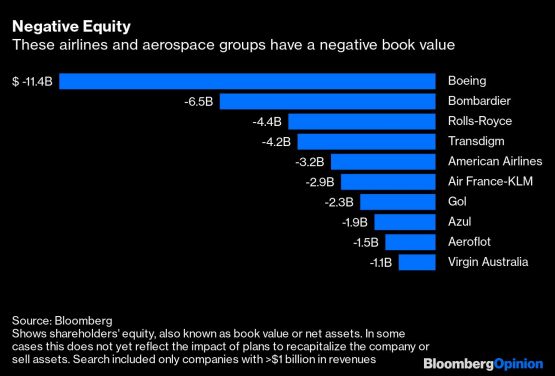 Some Rolls-Royce investors aren’t happy about doing a rights issue now, according to the Financial Times. The shares touched a 16-year low recently so you can understand their reluctance. If shareholders don’t participate their stakes would get diluted.

And yet, waiting for a recovery could be the wrong move.

A second virus wave, a disputed US presidential election or Brexit could all create equity-market volatility later this year. Plus, institutional investors don’t have unlimited capital to throw at companies, as my colleague Chris Hughes has noted.

Indeed, demands on shareholder cash are likely to be enormous. Across Europe, companies face a €720 billion bill to replenish lost equity capital. That figure includes small and medium-sized companies, which are less able to tap equity markets. Those that have the luxury of raising capital the easy way should take it, while they still can.