Cherish your job, and work hard

The unemployment rate is actually higher than the 29.1% reported by the media after the release of the latest figures by Statistics SA, and forecasts indicate that it will continue to climb in 2020.

Stats SA seems to have downplayed the much higher ‘expanded’ unemployment rate of 36.9% in its report, following its Quarterly Labour Force Survey conducted in the last quarter of 2019. The so-called expanded definition of unemployment includes unemployed people who have given up hope of finding a job and stopped searching.

Including these discouraged work seekers increases the number of unemployed to nearly 9.6 million, compared with the 6.7 million recognised as unemployed by the strict definition of unemployment used by Stats SA to calculate the 29.1%.

The unemployment statistics also exclude a huge number of people who earn a meagre living in the informal sector: for instance by selling trinkets at traffic lights or offering a car wash in a parking lot. It would be interesting to research how many of the nearly three million workers in the informal sector would consider themselves self-employed and who would not turn down a formal job and the minimum wage.

Unfortunately, unemployment is expected to increase even further in 2020.

The most recent quarterly bulletin from the South African Reserve Bank (Sarb) states that prospects for meaningful employment creation and wage growth in the SA economy are weighed down by sustained weak domestic economic activity and low business confidence.

SA’s where it was during the global financial crisis

The document includes a graph that tracks employment expectations – predicting a further rise in unemployment in the formal sector. The reading on the graph is currently at the same level it was at during the world-wide financial crisis, when banks failed in 2008 and people predicted the end of capitalism.

No, Sarb got the wrong graph, say economists at the Bureau of Economic Research (BER) at Stellenbosch University, who designed this leading indicator. “The graph is the composite index of real employment figures for different sectors,” says Nicolaas van der Wath, an economist at BER. 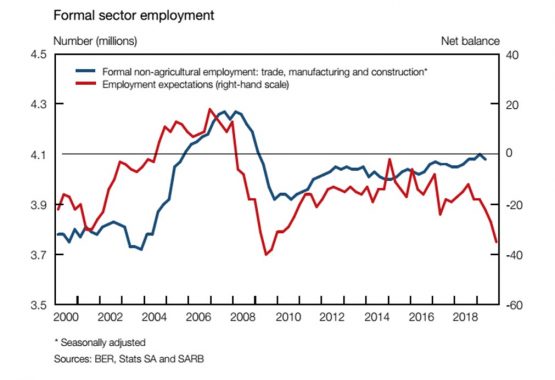 As such, the graph shows that the decline in employment is already happening.

Announcements of large retrenchments by several big companies bear this out.

In just the last few weeks, Massmart, Educor, ArcelorMittal, Telkom, SA Breweries, Tongaat and Samancor have announced plans to retrench workers. This affects a total of nearly 10 000 workers and their families.

State-owned enterprises (SOEs) are not immune either. Eskom has started to offer voluntary packages to employees and it seems likely that its huge work force will have to be cut drastically to ensure its survival. SAA and SA Express have both cut back on their operations and job cuts are likely to follow. The financial situation at other big state companies such as the Passenger Rail Agency of South Africa (Prasa), Transnet and PetroSA points to job losses too.

Even Stats SA, purveyor of unemployment statistics, lamented last week that it contributes a few hundred to the unemployment figures because it does not have enough money to fill vacant posts.

Van der Wath says the BER does not compile a composite employment indicator, but calculates one for the manufacturing industry from a quarterly survey of businesses involved in the (mostly labour-intensive) manufacturing industry. This predictive indicator reached its lowest level since 2008 in December 2019.

Moneyweb asked more economists for their views with regards to the outlook for employment and what could be done to improve the dire situation.

We received only bad news.

“However, unemployment continues to increase as the labour force is increasing faster [than the rate at which] we can create jobs. The economy is struggling, and businesses are forced to cut costs when business activity decreases and they see their income fall. This leads to reducing employee [numbers].”

Odendaal says the top three factors that would increase employment are:

“Our labour regulations are similar to [those of] first world countries,” he says, adding that the reality of low growth and a low-skilled labour force is not compatible with existing regulations.

“We need to make it easier for those sectors that are labour-intensive to create jobs,” says Odendaal.

He suggest that we look differently at the problem of structural unemployment – the situation where workers don’t have the right skills for modern jobs – by creating suitable jobs in manufacturing, tourism and agriculture.

Dr Chris Harmse, economist and chief investment officer at Rebalance Fund Managers, says exactly the same situation persists now, at the beginning of 2020, as at the end of 2019 when the Sarb was writing its quarterly report and Stats SA was calculating its unemployment numbers.

“The reintroduction of load shedding by Eskom has already started to have a negative effect. Manufacturing production during December was already down by more than 5% year on year and retail sales turned negative. The World Bank, the Reserve Bank and rating agency Moody’s all downgraded their growth forecasts.

“One can therefore expect that another 200 000 jobs in the formal sector will likely be lost in 2020 and we can expect the unemployment rate to increase by almost 2% by the end of 2020 to an overall unemployment rate of nearly 31%,” predicts Harmse.

He says we must also take into account the contagious effect of the coronavirus in China as it might impact on SA’s commodity exports to China. He expects the long awaited downgrading by Moody’s of SA’s sovereign debt to junk may also cause extra pressure on the economy and impact employment.

Dawie Klopper, economist at PSG Wealth, says the single biggest cause for the persistent high unemployment rate is lack of economic growth.

“There is a direct correlation between growth and employment. Unemployment will fall sharply if economic growth increases to above 4%.

“Economic growth is only possible if we can improve business and consumer confidence. That needs certainty,” says Klopper.

He says the debate around the change of Article 25 of the Constitution to allow for expropriation of property must be finalised and Eskom must be fixed once and for all, especially with regards to the role of sustainable energy.

“In fact, allowing the construction of new green energy projects could be SA’s most successful growth story in 2020,” says Klopper.

“In addition, the whole education sector needs urgent attention to ensure that the economy gets qualified people over the long term to ensure long-term growth.” He also lists unyielding labour legislation and regulations as a limiting factor in creating employment opportunities.

Does SA have any chance of winning the battle against unemployment?

Looking a bit wider than only the labour force and unemployment figures suggests a war, rather than a battle.

Estimates from Stats SA put the population aged between 15 and 24 years that could eventually enter the labour force at 38.7 million, compared to the active labour force of 23.2 million economically-active people either employed or unemployed.

A large proportion of the other 12 million is at school or attending other educational facilities, and will be entering the labour market en masse very soon.