Ten years ago, the social media advertising landscape looked vastly different than it does today. With rudimentary targeting options, getting your ads in front of an interested audience meant tons of research to find exactly the right person at exactly the right time – all manually.

However, in recent years the advances of A.I have opened up a wormhole of unlimited potential, allowing you to broadly target entire regions with the A.I doing most of the work….Or has it?

In this article, we dive deep into Facebook’s automated ad tactics playbook – Facebook Power5 – and see if human or machine comes out on top.

Our experiment will answer the burning question on every advertiser’s mind: Which is the best audience for Facebook Ads?
The result is mindblowing!

If we distill Facebook advertising down to just the key elements that we can control, we end up with only four factors:

You can adjust all of them using both Facebook Ads Manager or AdEspresso.

This highlights the importance of selecting the right audience, and it’s something we’ve explored in some previous $1,000 experiments. We discovered the best percentage of lookalike to use, whether or not to use interest expansion and if interests or lookalikes give the best results.

Recently, Facebook has been promoting its Power 5, a set of five automated ad tactics designed to improve results while saving you time.

One of the Power 5 is account simplification, where instead of having multiple small audiences you consolidate them into a broader audience:

The experts at Facebook are now regularly advocating for fewer adsets with larger audiences, for example for Dynamic Product Ads they suggest targeting a certain area and demographic but not using lookalikes.

Facebook also published a case study with US-based sock company Bombas where only two audiences were used for their entire Facebook advertising strategy, including a broad audience.

Why Use Broad Audiences?

If we travel back in time to the early days of Facebook advertising, the built-in optimization wasn’t very advanced.

This meant that the key to success was to put a lot of effort into creating micro audiences, perhaps layering in several interests or combining interests with lookalikes so that you could show the ad to everyone in the small audience and get good results.

These days, Facebook optimization is a lot better, so instead of showing the ad to everyone in the audience, you can optimize for conversions and Facebook can save you money by only targeting a subset of people in the larger audience.

The large audience keeps the CPM (cost per thousand impressions) down and increases the potential to scale as more people can be targeted.

Many advertisers have stated the perfect audience size to be around 1-2 million people, and for reference, a 1% lookalike in the US contains 2.1 million people which is a good fit.

With a broad audience, no lookalike or interest targeting is used at all, creating an even larger audience and relying totally on Facebook optimizing for conversions to display the ad to just a small subset of that large audience.

For instance, a US-based broad audience aged 18 and upwards without any filtering contains 230 million people.

Can such a large audience really give good results?

Let’s find out by putting $1,000 of ad spend into an experiment!

When setting up this experiment we made four predictions:

However, the CPC (cost per click) would be similar for both audiences, as the cost of a click depends on the CTR and CPM.

The people in the 1% lookalike should have similar characteristics as the seed audience of current registrants, so they would be the best fit for the webinar.

As we know, the CPA depends on the CPM, CTR and Conversion Rate; with so many factors influencing the final result, it was was hard to predict the exact difference in CPA between the two audiences.

The goal of this ad campaign was to get registrations for our next webinar using a standard image ad in a conversions campaign.

Here’s what we did step-by-step. 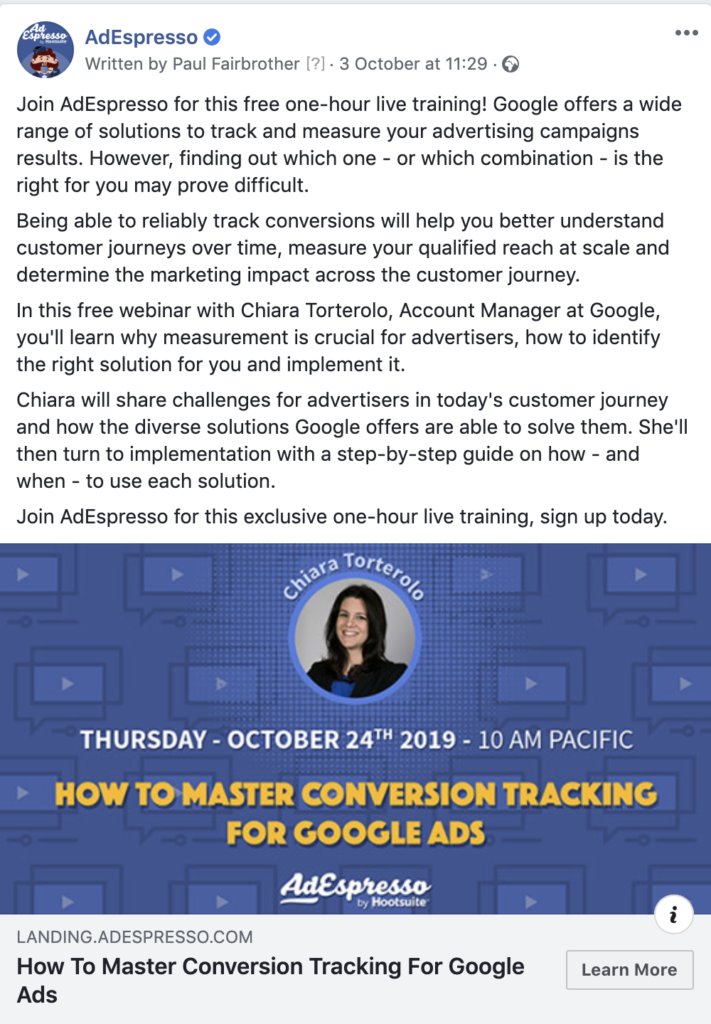 When clicked, it took people through to a landing page where the Complete Registration pixel event was fired when someone signed up for the webinar: 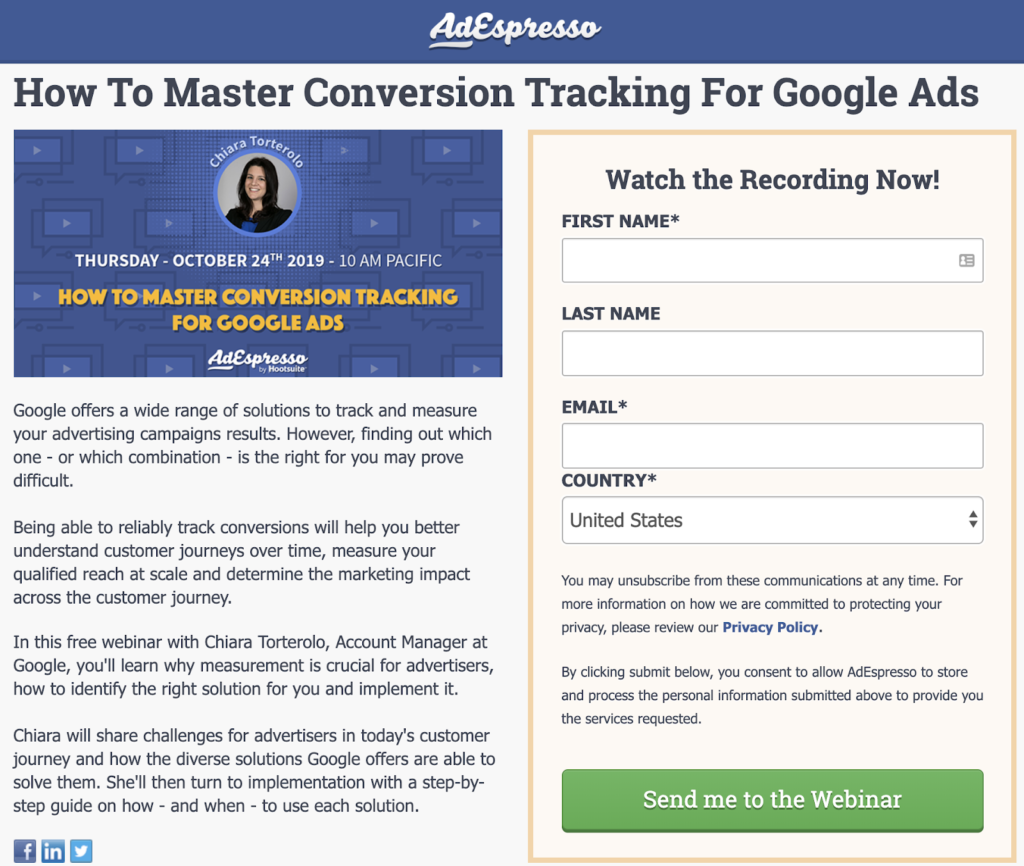 a 1% lookalike was created based on current 180-day Complete Registration pixel fires.
We targeted US only, males and females, ages 18+.
Current complete registrations were excluded.
The audience size available to target was 1.7 million

this was all of the US, males, and females 18+.
The 1% lookalike and current complete registrations were excluded to avoid internal competition which would push up ad prices.
The audience size available to target was 170 million.

There was a big difference in the number of conversions and the cost per registration between the audiences. Honestly, we didn’t predict is such a discrepancy!

The broad audience cost 3.75 times more per conversion than the lookalike audience.

The levels of engagement on the ad also showed a large variation:

The broad audience had the lowest CPM as predicted, and the lookalike had the best clickthrough rate, cost per click and cost per registration.

So, the clear conclusion is to always use lookalikes and never use broad audiences, right?

There are two very important factors that this experiment hasn’t been able to cover, but they need to be considered when deciding your targeting strategy:

The broad audience only got 18 registrations in total and never completed the learning phase.

This chart shows the number of registrations per day:

The broad audience adset wasn’t even close to this, indeed on some days, there was only one or even zero conversions.

The results could have been far different if the number of conversions was higher, allowing the learning phase to be completed.

Imagine an example of an adset that was getting $1 leads, for $50 a day. It would have got 350 conversions in the first week and completed the learning phase in a day. In that case, the broad audience might have worked.

If you’re just running one campaign with a moderate budget, then we’d pick a lookalike audience rather than a broad one.

Advertisers rarely just run one campaign though, most are placing dozens of campaigns throughout the year and looking to scale budgets. Audiences get ad fatigue if they keep seeing a high number of ads from the same advertiser.

Even if you switch lookalike sources, such as using a value-based or a purchase lookalike, or another lookalike based on leads, they will have a high degree of overlap.

There’s only so many times you can target the same lookalike audiences when regularly running campaigns, and that’s when it’s useful to switch to broad audiences.

If we look at the audience saturation for the lookalike audience, we can see that performance starts to decline even with a relatively low frequency:

Sometimes brands are spending tens of thousands or even hundreds of thousands of dollars per month on Facebook. Their strategy has to be different to someone placing a single campaign.

So test different audiences and also be prepared to change strategy as your ad spend increases.

Many high-budget advertisers are switching to broad audiences to find fresh people to display their ads to. But when looking at the ad account as a whole this keeps the average CPA down.

from this experiment we can draw five important conclusions:

That’s all (for 2019) folks! See you soon with the next experiment.

What “go-to audience” you use the most? Do you prefer precise targeting with small audiences, or choose to expand the size and go broader? Let us know in the comments below.